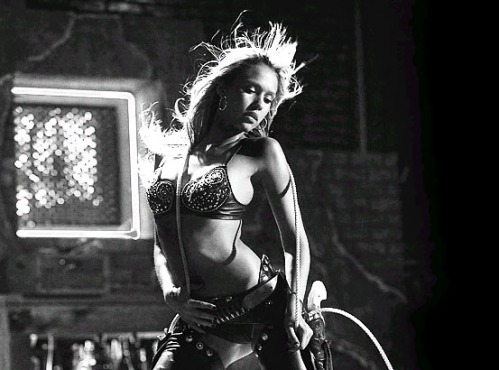 Four tales of crime adapted from Frank Miller’s popular comics of the same name, this film, directed by Miller and Robert Rodriguez (Grindhouse, Once Upon a Time in Mexico) and Quentin Tarantino (Inglorious Basterds, Pulp Fiction), that focuses around a muscular brute looking for the person responsible for the death of his beloved Goldie, a man fed up with Sin City’s corrupt police department who takes the law into his own hands, a cop who risks his life to protect a girl from a deformed pedophile, and a hit man looking to make a little cash.

Anyone who has ever loved comic books has always waited for a film that conveyed the feeling you get while reading one.  Well, comic book lovers, your movie has come!

Sin City is a film that is so unbelievable visual, so unrelentingly interesting, and so fleshed out with interesting characters and multiple plot lines that, yes, I would call it a living and breathing comic book.  Rodriguez has hit one out of the park and created by far his best film to date and the performances he’s given by Mickey Rourke, Nick Stahl, Clive Owen, and Bruce Willis are stellar all around.

The thing I noticed while watching this movie was that once one story ended and another began, I kept thinking the last part couldn’t be topped and I was wrong.  Each part of the plot perfectly complements the other to create one large story in the vein of Tarantino’s “Pulp Fiction” or “Reservoir Dogs.”  I will give a word of warning to the squeamish:  This film contains ultra explicit violence that is almost unrelenting from start to finish.  If you can handle that and love comic books, you’d be doing yourself a disservice to miss out on this gem.

One response to “Sin City”