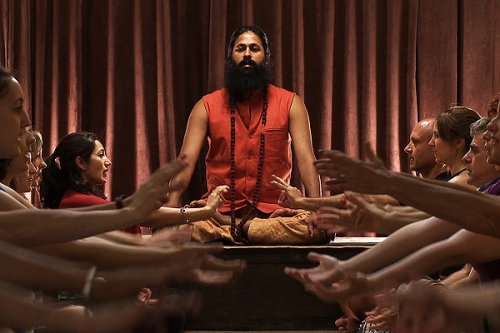 Filmmaker Vikram Gandhi puts an unexpected twist on this sobering documentary about spirituality and the power of suggestion when he poses as a prophet named Kumaré and develops a sizable following in the American Southwest.

On the surface, it seems like Vikram Gandhi is just duping some hapless people when he poses as a guru from India and persuades them to follow him.

But what Gandhi did was teach them about “illusions” of spiritual leaders, and that they don’t need them and that all strength comes from within. He manages to get a group of 15 faithful followers — a medical student and death row defense attorney among them — who are firm believers in the teachings of Kumaré, Gandhi’s guru alter-ego.

I just love how Gandhi challenges the audience, making us uncomfortable as he teaches a lot of made up nonsense, talking in a fake accent (he’s from New Jersey), as he dons authentic garb of India with a grown-out beard and long hair. He gets people to do some pretty silly things and open up to him with deep, personal problems. If you have faith, it challenges your ideals. If you have none (like the filmmaker), then it reaffirms your belief. And Gandhi did his homework — interviewing other so-called gurus and guides. At the end, there is a reveal, and while I won’t give anything away, it’s a very satisfying closure. This film is available on Netflix streaming, and it’s definitely worth a watch. Such a great concept for a film.