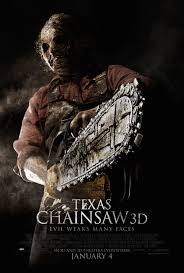 A young woman travels to Texas to collect an inheritance; little does she know that an encounter with a chainsaw-wielding killer is part of the reward.

Egads. Even though horror fans have seen iconic movie villains like Freddy Krueger, Jason Voorhees and even ole Mikey Myers rebooted, remade and re-imagined we seem to have forgotten Leatherface somewhat. Well in true predictable form we are treated to a grittier, violent and deranged Leatherface but a Leatherface that is actually a type of vigilante or “anti-hero” that is going after some people who either get in his way or have it coming. What Director John Luessenhop (Takers) gets right out of the gate is deftly re-create the climax of Tobe Hooper’s seminal movie. Using some new footage smartly intermixed with Hooper’s. Here he sets things up for us and with precision and gravity Luessenhop manages to invent some mood with dark carnage and twists. Unfortunately, that is all that he gets right. Everything else after the interesting set up is so predictable, fabricated, boring and incredibly dull. I have never been a huge Leatherface fan having only watched some entries of the franchise here and there. Luessenhop doesn’t accomplish much in the way of sparking some real interest all around here. It’s all violent style over much needed substance.

Some will argue that it is indeed a decent entry because it does deliver some of the more horrific elements of a crazed slasher film but I have to disagree. It delivers all right but it’s not chills and thrills. Actress Alexandria Daddario (Hall Pass) plays Heather Miller who has been notified that her wealthy Grandmother  has left her a huge house and property. After she discovers that she is adopted, Heather reluctantly decides to  travel to collect her inheritance. She gets her  friends Ryan, Nikki and Kenny together for the road trip and they head out. Along the way they pick up a hitchhiker named Darryl. They make it to the house and after doing a walk through of it Heather decides to go and get some supplies from town and they leave Darryl behind to loot the place. Dumb thing number 1. Never leave a total stranger to watch your brand new house which is full of expensive silver objects. And the dumb things continue. One right after a another. We are introduced to Leatherface (Dan Yeager) who survived the attack upon the Sawyer Home 20 years before. He is indeed creepy and very menacing but only in a cartoony sort of way. I just couldn’t take him seriously. So, Heather and her friends learn the hard way that Leatherface comes with the house like some sort of rapid pet. Yikes. 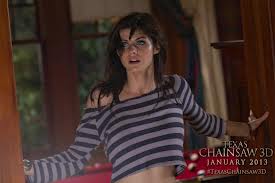 The devil is  in the details here in this movie and some things do not gel. The film shows a lynch mob that destroys the Sawyer home with fire but 20 years later it’s perfectly re-built. Characters do not age and bodies are found with no explanation. It’s these little things that wreck the film. Well, this and the fact that everything else sucks. There is no suspense. The chases are boring and uninspired. Kenny and Darryl both run afoul of Leatherface in grisly ways that involves large metal hooks and Kenny gets sliced right in half in a deliciously gory and funny moment. Leatherface goes after Heather and the rest and in the escape he causes the getaway van to crash. Heather gets away from the wreck but her boyfriend Ryan (Rapper Trey Songz) doesn’t fare too well. Tania Raymonde (Lost) plays Nikki, who even though very sexy here,  can’t seem to escape cliche territory when facing the killer. The one high point of the film is when Leatherface runs amok at a carnival that Heather escapes to. But it is too little too late. Texas Chainsaw delivers a dull continuation of the iconic and mythical  film. It is riddled with cliche after cliche and it is incredibly boring. Luessenhop fails in his plot and execution. In the last act the movie totally falls apart. In a last ditch effort to impress, Luessenhop reveals something about both Heather and Leatherface that is a bit laughable and trite. I’d stay clear of this mess gang. But if you do have to see it then don’t expect anything other than a bad movie that isn’t bad enough to be good. 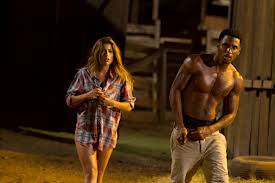