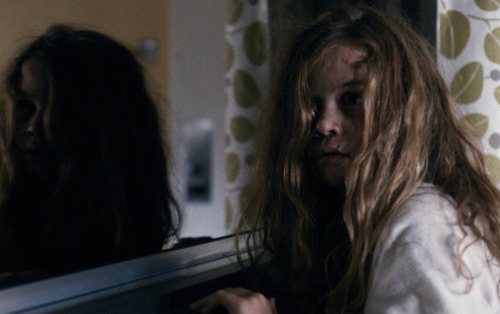 Two girls left to fend for themselves in the forest for five lonely years after the death of their mother find refuge in the home of their uncle. But it soon becomes clear that the girls have not arrived alone in this woodsy supernatural chiller.

I really liked the premise of Mama. It sets up extremely well. The opening scenes are the tragic end of a family and how two little girls survive with the help of a paranormal mother figure.

The film is shot very well by director Andres Muschietti. There are a number of chilling scenes. In one, a character is in a dark room, pitch black, with nothing but a camera. He uses it for light, flashing shots to illuminate his surroundings. You’re forced to sit there, waiting for worst of things to happen. I also like that Mama never pulls back. The film takes some dark routes, which left some people I watched the movie with upset. There’s no happy ending.

Mama does, however, drag. But the moments of intense frights, combined with excellent performances by the two children and Academy Award-winning Jessica Chastain, hold the movie together well. Not the best thriller I’ve ever seen, but certainly entertaining and worth a watch.