Scott Pilgrim Vs. The World 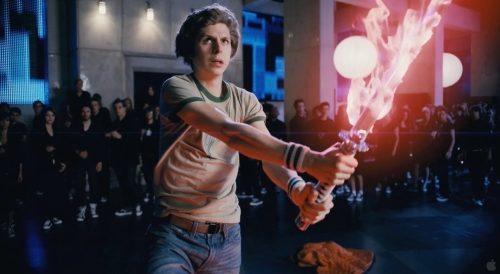 Scott Pilgrim’s 23 years old, in a rock band, between jobs, and dating a cute high school girl. Everything’s fantastic until a seriously mind-blowing, dangerously fashionable, roller-blading delivery girl named Ramona Flowers starts cruising through his dreams and sailing by him at parties. But the path to Ramona’s heart isn’t covered in rose petals. Her seven evil exes stand between Scott and true happiness. The film is based on the Oni Press graphic novel “Scott Pilgrim Volume 1: Scott Pilgrim’s Precious Little Life.” The film stars Michael Cera (Super Bad, Youth in Revolt) as Pilgrim. Directed by Edgar Wright (Hot Fuzz, Shaun of the Dead).

I know what some of you may be thinking: “Oh, another Michael Cera movie. You’ve seen one, you’ve seen them all.” I hate to burst your bubble but this definitely isn’t your typical Michael Cera film. What the cast and crew brought to “Scott Pilgrim Vs. The World” was truly a unique blend of action, comedy and romance. The moment the Universal Studios logo hit the screen, I was laughing. The moment a duel-to-the-death began to take place, I was at the edge of my seat with anticipation. Even the heartbreak and romance within the film was relatable to those who haven’t had the best of luck in relationships. The film continued to surprise me from scene to scene; from the random acts of the characters and their dialogue, to the visual and sound effects mimicking NES games, the film is nonstop fun.

There is an ideal combination of special effects and physical hand-to-hand combat with a dash of arcade style humor. It was like watching a live-action comic book fight or video game battle take place right before your very eyes! Nothing beats hearing an enthusiastic howl of “K.O.” from a non-existent referee.

The fact that it opened alongside “The Expendables” and “Eat Prey Love” is disappointing. The combination of these two movie’s audiences unfortunately exceeds the comic book/video game audience. Whether it’s by word-of-mouth or its Blu-ray and DVD release, I strongly hope  this film gets the attention and respect it deserves.

The Movie Brothers are happy to welcome Kyle Baker as a new contributor. He’s an avid movie lover and studied television and digital film design and production at the State University of New York at Fredonia. For those of you who use Flixter on facebook, Kyle is a regular reviewer.