As the result of a childhood wish, John Bennett’s teddy bear, Ted, came to life and has been by John’s side ever since – a friendship that’s tested when Lori, John’s girlfriend of four years, wants more from their relationship. 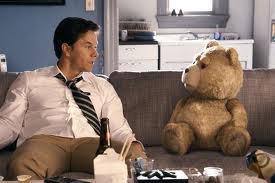 The premise of this film is actually quite good. What would happen if your Christmas wish came true and your teddy bear came to life and was your best friend? Now, what would happen after you grew up and you couldn’t get the bear to move out of your apartment? It’s a funny and refreshing idea from the mind of Seth MacFarlane who is most well known for being the creator of the Fox show Family Guy. I’ll be completely honest. I absolutely hate Family Guy. I’ll admit that humor is a very subjective thing and one person’s treasure can be what I might roll my eyes at. That show is a collection of stupid fucking jokes that have no relevance to anything. Thankfully, Ted does not suffer from that problem. The plot is very easy to follow and the performances, particularly by Wahlberg and Kunis, are very good. They both communicate convincingly with the bear and after a while he almost becomes real. The problem with that is that it eliminates the entire hook of the premise.

If the viewer grows so comfortable with a teddy bear as a main character that he fits into every day life, why make him a teddy bear at all? That was the main problem I had with the film. The idea is that the living teddy becomes such old news from the 1980’s that no one even gives a shit that he’s alive. That kind of eliminates a lot of the jokes. Teddy goes out to dinner, parties, has “sex”, does cocaine, and hosts parties and people don’t even react to him. He’s just another guy. It seemed like a terrible waste of a really good premise.

On the positive side, the first hour has some really funny moments. I did find myself laughing loud and often and it was a lot of fun. The second half goes the emotional route and lost me a bit but it’s still a comedy I can moderately recommend if you’re willing to lower your expectations a bit.

Top 5 Movies Shawn Was Right About 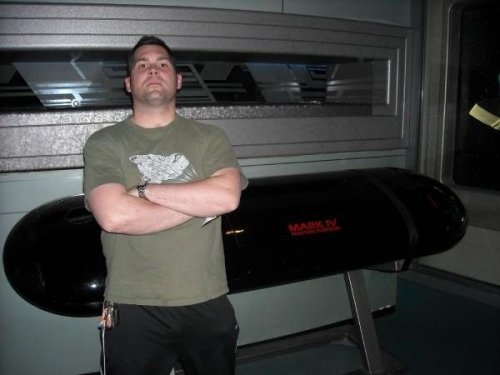 I tease my cousin Shawn about his taste in movies a little more than I probably should.

Shawn loves classic, critically-acclaimed cinema as much as I do, but he also loves shoot-em-ups, science-fiction, and action movies I would never even consider watching. He loves the, and I quote, “‘splosions,” and “pew pew.” He said he enjoyed “The A-Team” more than “Black Swan,” and said “Transformers: Revenge of the Fallen” was good.

He can be sentimental, too, for movies like “Shrek Forever After.” He loves TV, which I don’t. But he does a superb job on our sister blog, TV-Tastic.

I ran him through the ringer for his review of “The A-Team” and I figured since I beat him up all the time, I should do a Top 5 list of movies Shawn was right about. 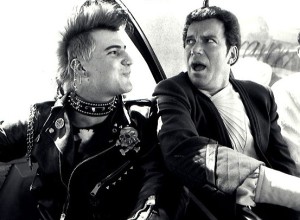 5. Star Trek IV: The Voyage Home: In this case, I thought this installment of the Star Trek film franchise was silly and far too wide a sidestep from the franchise. Shawn, a giant Trekker of the most massive scale, explained to me that I shouldn’t over think it. This is the Star Trek comedy. I hadn’t watched it in a long time and went back for a second viewing. Shawn was right. This is a lighthearted, fun Star Trek adventure that is very accessible and I enjoyed far more the second go around. 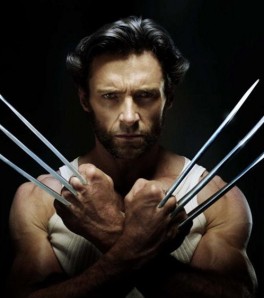 4. X-Men: Before going to see this  in the theater with Shawn, I really thought it wasn’t going to work. With a massive cast and so many characters to develop in the huge X-Men Universe, I didn’t think they could pull it off. I really wasn’t amped about seeing it, but Shawn really wanted to go. And he was right. It was a blast. The Wolverine performance by Hugh Jackman remains among the best ever in comic book films. I was wrong, yet again. 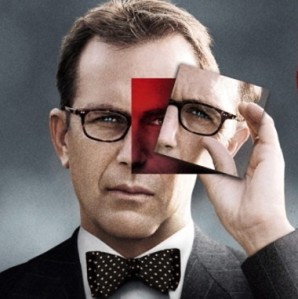 3. Mr. Brooks: This was a movie I totally would have overlooked. Kevin Costner has passed his peak, and I don’t really seek out his films anymore. But Shawn reviewed this film for us, and based on his recommendation, I checked it out. Very solid little psycho-drama, mystery movie with a really good performance by Costner. Good choice, Shawn. 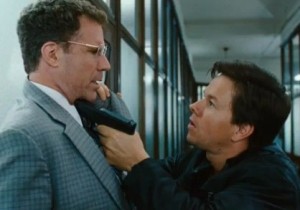 2. The Other Guys: This was another one of those movies I would have passed over. I like Will Ferrell, and all, but another buddy police comedy? Like that hasn’t been done? Well, this happens to be one of the best ones. We laughed often and hard in the theater when we went to see it. We had a blast, and I’m glad he got me to go. 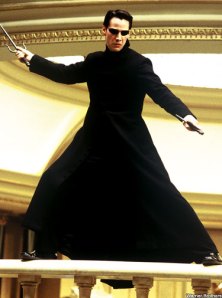 1. The Matrix: Man oh man oh man, was I wrong about this one. Because Keanu Reeves was in this, I instantly wrote it off as a crap-fest of epic proportions and literally scoffed at Shawn when he glowed about it to me over coffee. When I finally got around to seeing this on video — God, was I late to the party — I was hooked on “The Matrix.” This is one of the best action/sci-fi films of all time. While the sequels may have left a bad taste in our collective mouths, the original remains a modern classic. 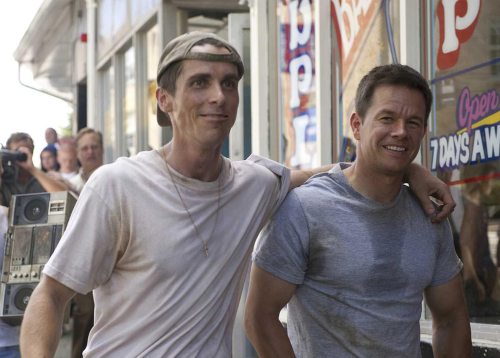 Mark Wahlberg stars as boxer “Irish” Mickey Ward and Christian Bale as half brother and trainer Dicky Eklund in this inspiring drama based on the fighter’s rise from working-class Lowell, Mass., to world-class welterweight champ. After a string of defeats, Mickey rediscovers his fighting will with help from Dicky — a once-talented pugilist battling drug addiction. The film earned multiple Golden Globe nods, including Best Motion Picture (Drama).

Director David O. Russell is one of the brightest minds in filmmaking. If you’re not familiar with his work, he’s responsible for the “I Heart Huckabees,” “Three Kings,” and the fabulous “Spanking the Monkey.” Historically, his work has always been original and visionary. His style is truly his own. That’s why I’m very surprised to see him do such a standard docudrama as “The Fighter.” It’s not that the film is bad — far from it. It’s a very solid story based on the true events of a middle of the road boxer who gets the chance to fulfill his dreams of becoming a boxing world champion. Sound familiar? Yes, I know it has been done to death but rarely in such an accessible and well acted package. Mark Wahlberg, Amy Adams, and Melissa Leo are all excellent. But it’s Christian Bale’s turn as Wahlberg’s crack addicted has-been brother that shines above them all. He absolutely disappears in this movie in a performance that is sure to get an Oscar nod and is the early favorite to walk away with the statue. He’s absolutely fantastic in it.

As for the film itself, I found myself most gripped whenever the story veered towards the family dynamic of Wahlberg’s home and professional life and least interested whenever he got into the ring. The fights are well choreographed and shot but I felt the film wasn’t about the fight, it was about life’s struggle to get there. 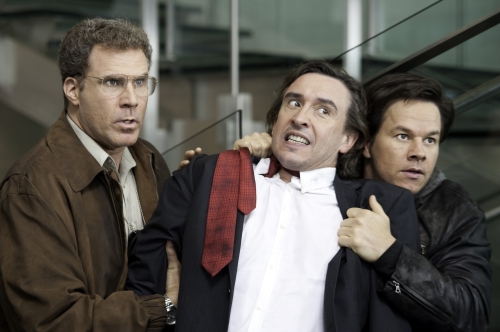 Terry Hoitz’s past mistakes in the line of duty and Allen Gamble’s reluctance to take risks have landed them the roles of the “Other Guys”, disgraced New York City police detectives relegated to filling out paperwork for cocky hero cops Danson and Highsmith (Samuel L. Jackson, Dwayne Johnson). The mismatched duo must look past their differences when they take on a high-profile investigation of shady capitalist David Ershon and attempt to fill the shoes of the notoriously reckless officers they idolize.

Maybe this is the Red Sox fan in me talking, but I just love a protagonist whose major setback in life was accidentally shooting Derek Jeter in game 7 of the World Series.

“The Other Guys” is a truly funny buddy cop movie by director Adam McKay, who brought us the classic “Anchor Man,” but not quite as good. He teamed again with Will Ferrell (Allen Gamble) who plays a straight-laced detective opposite the loud-mouthed Terry Hoitz, played nicely by Mark Wahlberg. The cast is rounded out by Michael Keaton, Samuel L. Jackson, Dwayne Johnson, and Eva Mendes.

This is a ridiculous movie, but it’s so chalk full of sharp talent that deliver bit after bit after bit. It was seldom when I wasn’t laughing. The film lags about three quarters in, but the ending picked back up. The cast made this movie, and if you’re a Ferrell fan, you definitely want to check this out. It’s a fun summer movie. 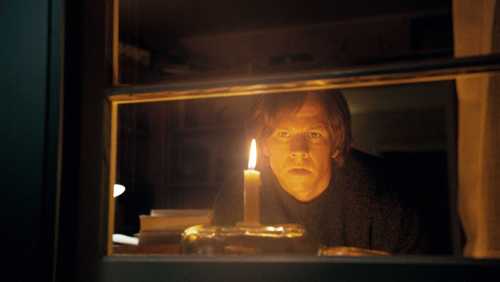 “The Lovely Bones” centers on a young girl who has been murdered and watches over her family – and her killer – from purgatory. She must weigh her desire for vengeance against her desire for her family to heal. Mark Wahlberg, Rachel Weisz, Susan Sarandon and Stanley Tucci in his Academy Award nominated role, make a cast directed by Peter Jackson (Lord of the Rings triology).

Jackson brings us an amazingly multi-dimensional murder story. It looks through the eyes of the dead, a 14-year-old girl murdered by a neighbor, played wonderfully by Tucci who just loses all sense of self in the role. Her father, Walhberg, is on an obsessive hunt, her mother, Weisz, is heart-broken and leaves home, and her surviving brother and sister are alone. But from the other side, Susie, played nicely by Saoirse Ronan, watches and influences the living from purgatory.

Susie can go to heaven if she wants, but chooses to stay, watch and even influence those who she knew to help close the case of her murder. Susie and her family mirror each other, each grieving the loss of Susie — the little girl is angry, she wants revenge, and so does her father and sister. Both are coming to terms with their losses.

This is an exceptional murder mystery/suspense/drama, and it is a nice turn for Jackson, who has spent most of his career with horror, science fiction and fantasy movies. There is a bit of fantasy to this movie, and Jackson’s sense of storytelling and his eye for visual effects comes through, but he didn’t step on the human elements of the story.

I can’t imagine there isn’t one of us that doesn’t wonder or fantasize what life after death might be like.  Is it beautiful?  Will our loved ones be there?  Does heaven exist?  These are extremely profound questions that could explain our very existence in this universe.

Unfortunately, the Lovely Bones is a film that is not clever enough to come close to answering any of them.  The afterlife here is presented as a constantly evolving world where day turns to night, winter turns to spring, and your very surroundings have no stability.  It’s more like a bad acid trip mixed with CGI and represents the weakest part of the film when it should be its strongest.

Now, that’s not to say that “The Lovely Bones” is a complete failure.  Peter Jackson is an extremely talented director and his use of editing and camera work is top notch.  There are also exceptional performances from Wahlberg as the young victim’s father and Tucci as one of the most deplorable characters I’ve seen on screen in quite some time.  But, in the end, (and I’ll warm whoever’s reading this: SPOILERS!!!!!), we never get a sense of justice for death of Susie and the killer’s death is tacked on and forced.  This was the kind of film that had a lot of promise and a ton of squandered talent.