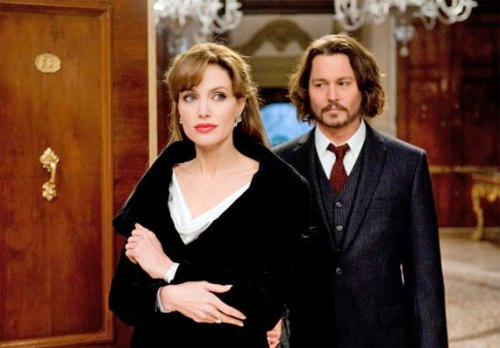 Watery Venice, Italy, provides the setting as Johnny Depp, playing an American tourist seeking solace for his shattered heart, instead finds it in danger again after encountering a beautiful Interpol agent (Angelina Jolie). Little does the Yank know that the artful lady has gone to great lengths to arrange their “chance” meeting and is using him to trap a thief who happens to be her ex-lover. The film earned Golden Globe nods for Depp and Jolie.

“The Tourist” should have been a good movie, maybe even great. Johnny Depp and Angelina Jolie in a caper through the romantic canals of Venice is a great set up. But something was missing. Chemistry, I guess.

The storyline was good enough. It starts in Paris where she is being watched by Interpol. She gets a letter from a mysterious man, hops on a train, and per his instructions picks up a look-a-like – Johnny. Depp plays a bumbling American math teacher, set against Angie’s cool, very together Brit. But from here it drags. The action never really takes off (and neither do those molasses-style boat chases) and the intrigue isn’t really that intriguing.

Johnny is better than Angie. He’s a bit charming and a little funny. She doesn’t have a moment of levity, though. It’s also odd to see her looking old and too thin.